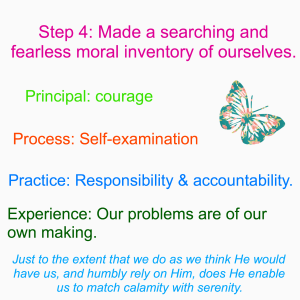 The question is rhetorical and designed to be provocative. Clearly, there is more than one right way to do the 4th Step. The twelve steps are designed to be a simple program which offers a spiritual solution to our very complicated disease.

So many of us are used to elaborate and complicated 4th step inventories. The problem is that too many people find it so complicated that they end up either not doing the work or doing the work, but not carrying the message to those who still suffer.

It is critical for recovery that this program be accessible and attainable to those who want it.  Dr. Bob said it best: Trust God, Clean House and Help Others. It really is so simple.

Below is a copy of part of the leadership format that I wrote for the last Back to Basics.

The 4th step suggests that we take a “moral inventory” of ourselves, which is generally understood to mean that step workers must look carefully at their lives and report back honestly about what they see. There is, however, no clear agreement in the 12 step fellowships about exactly how one should look at oneself or exactly what step workers should look for while they are at it.

A careful examination of the AA BB reveals that the 4 column inventory that is now so common in the 12 step communities was not actually practiced in the early days of AA. Most people did the Assets and Liabilities type of 4th steps.  The checklist is described on pages 64-69 in the AA BB and was used by many of the AA pioneers to take newcomers through the steps in the 1940’s and 1950’s.  It precedes the 3 column inventory in the BB which is described on page 65.  In fact, explanations on how to use the 3 column inventory weren’t published until the 1970’s.

Dr. Bob believed that initially, newcomers should be taken through a simplified version of the steps. Later, they can work the program in more detail.

[Personal aside: the earliest records of the 5 column written inventory date back only to the late 1960’s, which coincidently was when cognitive behavioral therapy became popular. This inventory is similar to CBT, which is an examination of how thoughts, feelings and actions fuel our resentments, fears and harms.  The root of our problems with this inventory is misdirected instincts.

The early AA program was focused on doing a moral inventory of the exact nature of our wrongs.  It was an examination of how our selfishness and self-seeking behaviors block us off from the God of our understanding.  The antidote is service: think more of others and less often about self.

I believe that the early AA program was more successful than program today due to the piety of the early founders of AA. They sought a spiritual solution to the problem of alcoholism as outlined in the BB — based on how our self-will blocks us off from doing God’s will — rather than a CBT solution. It cannot be a coincidence: since this inventory has become the standard format, 12 step recovery rates have dropped.]

One of the main differences between the two styles of 4th step is that the 4 column addresses Resentment, Fear and Sex, whereas, the Assets and Liabilities addresses Resentment, Fear and Harms; all harms including sexual and financial are covered. Somehow in the Big Book many of the instructions for harms got put under the main heading of “Sex” but really they were looking for all harms not just sex. This is still frequently passed on through the word of mouth program transmitted today.

In addition, the early AA program emphasized making restitution for harms done to others as essential for recovery.  The ninth step promises only come true after we make our amends. The goal was not to do a perfect 4th step, but, to get to the place where we can make amends for our past behaviors.  Once we get right with others, we can focus on getting right with ourselves and God.

An example of the Assets and Liabilities format for step 4 is illustrated in Dr. Bob’s approach on page 292 AA 3rd Ed.     “…Dr. Bob’s afternoon off, he had me down to the office and we spent three or four hours formally going through the Six-Step program as it was at that time.  The six steps were:

Dr. Bob led me through all of these steps.  At the moral inventory, he brought up some of my bad personality traits such as selfishness, conceit, jealousy, carelessness, intolerance, ill-temper, sarcasm and resentments; we went over these at great length and then he finally asked me if I wanted these defects of character removed.  When I said yes, we both knelt at his desk and prayed, each of us asking to have these defects taken away.

This picture is still vivid. If I live to be a hundred, it will always stand out in my mind.  It was very impressive and I wish that every AA could have the benefit of this type of sponsorship today.  Dr. Bob always emphasized the religious angle very strongly, and I think it helped.  I know it helped me.  Dr. Bob then led me through the restitution step, in which I made a list of all the persons I had harmed, and worked out ways and means of slowly making restitution.”  (AAp.292-3rd ed.; AA p.263-4th ed.)

In short here’s what they did:

Some of Dr. Bob’s sponsees are alive today with over 50 years of sobriety and testify that they took the steps either in the hospital or at Dr. Bob’s office the same way as Earl T.  And Dr. Bob took over 4,800 people through the 12 Steps in his life time-that’s about one person a day.

The Assets and Liabilities 4th step Inventory consists essentially of one page that is duplicated as needed. How many copies needed will depend on how many names the person has on their resentment, fear and harms list. One of the great things about using this list is that it becomes very easy to do. Everything needed to take a person through steps 4 thru 9 is right there on one page. Once it is learned it is very simple to take a person through the steps and to show them how to take someone else through the steps. Self Will is all lined up on one side and God’s Will is all lined up clearly on the opposite side of the list. The amends are all listed right there with all of the harms as well. It’s easy to see why the founders preferred to use this style of 4th step to work the steps.

Doing a 4th step moral Inventory was not intended as a long, arduous process of self-introspection. That would have been considered grandiose or self-centered; the opposite of what the founders were trying to do.   Daily inventory continued afterwards and a yearly 4th Step was often employed, but the initial 4th step was pretty simple and fast. They wanted to get a person while they were still in a hopeless state. “Till the black soil of hopelessness” as Dr. Silkworth said. This has to be done pretty soon after a person stops drinking or they will heal up and the ego will regain control.

Here is the format in full:

11-27-2020: the reference from recoverytoday.net is no longer active. They had an article called “a simple but not easy fourth step guide.”

I was able to find a copy of it included in this document. It was written by Rev. Bill W.

This is from a wonderful site called “rumradio.org.” It also includes a great explanation of how to do a 4th step using the assets and liabilities format.