Making amends is more than an apology

Making amends is more than an apology

Addiction creates moral wreckage. People who become addicted to alcohol or other
drugs might lie, cheat, or steal in order to get and use their drug of choice. Often
what’s left behind is a trail of shattered relationships.

In this situation, apologies won’t do. Alcoholics Anonymous calls for amends instead. These are mentioned specifically in several of AA’s Twelve Steps, including:

Step Eight: Made a list of all persons we had harmed, and became willing to make amends to them all.

Step Nine: Made direct amends to such people wherever possible, except when to do so would injure them or others.

Carrying out these two steps is a delicate process that calls for guidance from a sponsor or counselor. In an interview, John MacDougall, D.Min., director of Spiritual Guidance at Hazelden in Center City, Minn., answered questions about making amends.

How do amends differ from apologies?

An amend has to do with restoring justice as much as possible. The idea is to restore in a direct way that which we have broken or damaged–or to make restoration in a symbolic way if we can’t do it directly.
Say, for example, that I borrowed 20 dollars from you and never paid you back. If I go up to you and say, “Gee, I’m sorry I borrowed your 20 dollars and spent it on drugs,” that would be an apology. Making amends is giving your money back to you.

Why does Step Nine suggest that people avoid direct amends in certain cases?

For instance, you don’t run home and say to your spouse, “Gee honey, I had a wonderful time in addiction treatment. I learned all about rigorous honesty, so I want to apologize to you for an affair I had five years ago.” That’s clearing your conscience at the expense of someone else who’s going to feel terrible. In this case, your amend can be an indirect one. Stop having affairs and bring your heart, your energy, and your attention back home where it belongs.

Yes. Say, for example, that someone gets drunk, drives, and kills somebody in a traffic accident. You can’t go back and “unkill” the person who died. Instead, you can fill out an organ donor card. This is an indirect amend that can give life back to someone in the future. Remember that with crimes such as drunk driving, people might need to go to court and take a punishment. That’s part of making amends as well.

You’ve mentioned direct and indirect amends. Are there other kinds?

Sometimes people talk about “living” amends. This simply means that we live differently. Amends are about a genuine change in our behavior instead of the patchwork of an apology. We take on a whole new way of life. We stop accumulating fresh insults to our selves and others.

What are the benefits of making amends?

If we’ve continually harmed people and haven’t made any effort toward amends, then we’ve got a lot of people, places, and things to avoid. Large areas of life become closed off to us. When you’re willing to make amends, those areas open up again. You don’t have to avoid people any more. This is true not only for people in recovery but for all of us.
The book Alcoholics Anonymous mentions the promises of recovery. They come right after the explanation of Step Nine. “If we are painstaking about this phase of our development,” it says, “we will be amazed before we are half way through. We are going to know a new freedom and a new happiness. We will not regret the past nor wish to shut the door on it. We will comprehend the word serenity and we will know peace.”

That’s what happens when we bring justice back into our lives by making amends. 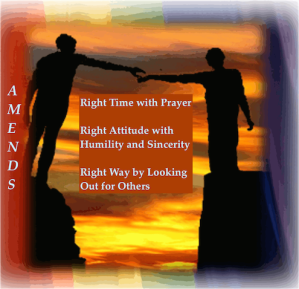